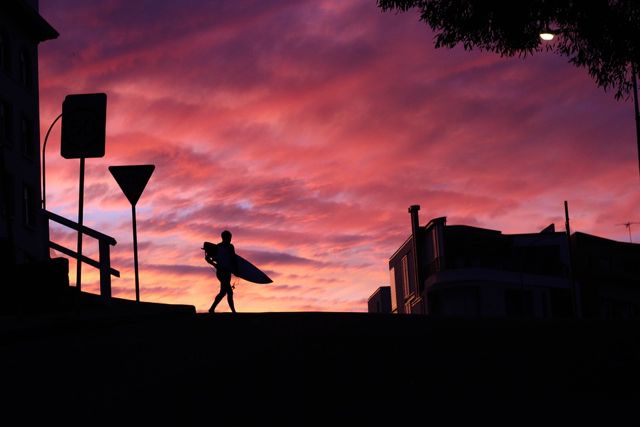 The ocean was still gray and quiet, storing itself up for a later morning surge of blue.

By the time David and I found a parking spot and got all of our gear together, it was 9:00 in the morning. There were a few people around and a group of surfers wearing matching wetsuits appeared to be addressing the waves together. Nearby, a father, not part of the group, lifted his little daughter again and again onto a small surfboard.

We unloaded our stuff and sank into our beach chairs for a long morning of beach watching. I brought out my yarn and began crocheting—my favorite pastime—and David began reading current events on his phone—his favorite pastime.

In about an hour, David put a dish towel from the ice chest on top of his head to make shade, after searching for the hat he ultimately realized he must have left at home.

“How old does she look to you?” I asked him, indicting the little surfer girl we had both been watching intermittently.

“Look at that!” Sure enough, there she was, standing on top of her board, arms out for balance, legs

bent at the knees in classic surfer stance, riding a very small wave, her father running protectively behind her.

I sat next to David chatting, interrupting his reading and my crocheting, the wind catching my yarn and drawing it out behind me in a tiny, winged swoop.

“What did you bring for snacks?” I’d brought shrimp and cocktail sauce, but wasn’t it a little early to be eating shrimp? “It’s never too early for shrimp,” he’d said, and I told him I’d put one more row on my scarf and then set all the snacks up, adding “that’s how I measure time these days, by how long it takes me to put one more row on a scarf.”

Out of the corner of my eye I could see David watching me, “What do you think about when you’re crocheting?”

I laughed at his question, realizing if I tell him the truth I would get busted for not having an answer about mindfulness and focus. I tell him the truth anyway. “Usually I think about what I’m going to crochet next. Like, what combination of colors I want to use, and how I’m going to best use the yarn I have to do it with.” I looked back up at the scene in front of me. “For example. I think about making a wave afghan for people who live near the ocean. Three different shades of blue representing the waves with a white-ish edge representing the foam.”

God bless him. David actually looks interested as I go on, telling him about the Halloween afghan I’d thought of making with little black cats sitting on a fence and about the Christmas afghan. All the while of course, my hook keeps moving in and out of the yarn on the black, white and charcoal scarf I was working on for a friend who lives in Chicago.

When I reached the end of the row I carefully inserted the yarn into the large plastic shopping bag I’d brought to protect it from the sand and began laying out our snack.

“I could stay all day,” I mused aloud. “For sure, I could stay until I watched the sun drop like a big orange dollop in the sky.”

“Oops,” David says. “That sounds like an orange scarf pattern to me!”

At that moment the father and his little surfing girl walked past. She was shivering now, hugging herself with her arms, no longer warmed by the exertion of energy and concentration she expended on the board.

I give her a thumbs up, actually two thumbs up, and called out something like “hang ten!” and we all laughed—me not even sure that surfers these days know what “hang ten” means.

A Zen surfer friend of mine once told me one of the things about surfing is it forces us to stay in the moment. “No wave is like the next. The ocean is constantly moving and you can’t allow yourself to think about the next wave—as sure as you do that, you fall off your board.” That was why, he’d claimed, people got “hooked on surfing. Surfing clears the mind.”

I think about the little surfing girl and imagine how her father, by teaching her to surf the waves, is also teaching her a lot else.

I look up and see from the right the grayish, heavy ocean air is literally being pushed away by the breezes. A bright blue sky revealing itself from behind its curtain. “Maybe we should think about leaving,” David says.

He’s right. As soon as the sun starts to come out, the beaches get too crowded for our liking.

“I don’t think I’ll wear my dish towel out for breakfast,” he jokes, taking it off his head gear and folding it. I pause for a moment to look at how much yarn I have left and tell him I still need a few more minutes before I’m ready to leave.

“I know. You just want to finish that row.”

By Carolyn Riker   “Won't it be wonderful when Black history and Native American history and Jewish history and all of U.S. history is taught from one book: Just U.S. history.” ~ Maya Angelou Yes, it will, but right now my blood boils with rage one minute...
Read More

By Debbie Lynn I have always felt alone, but not lonely. This feeling began when I was very young and it was hard. I didn't have the tools, the knowledge or the understanding to articulate the emptiness, so began the titled vision of my alone. As a child, I was...
Read More

Love is Wishing You Happiness Without Demands.

By Deb Avery When we tell someone I love you what do we really mean? Exactly what is this thing called love? I have used this phrase many, many times in my life, with many people, animals and even places. Sometimes it's my way of communicating the attraction,...
Read More

Embrace Your Truth: A Survivor Story.

By Carlana Charles   Who do people say you are? How do they define you? Who do you know you are? How do you define yourself? It’s amazing how much we absorb and embrace the labels people put on us. Ugly, stupid, worthless, failure and a slew of words all...
Read More

Carmelene Melanie Siani
Carmelene Melanie Siani is a 77 year old woman who began writing for publication on her 73rd birthday in 2015. She writes stories and vignettes about life and how life itself gives us the lessons, hopes and direction we need to put our feet on higher ground. You can find her writing at elephant journal, the Kindness Blog, and on her writer’s Facebook page.

Carmelene Melanie Siani is a 77 year old woman who began writing for publication on her 73rd birthday in 2015. She writes stories and vignettes about life and how life itself gives us the lessons, hopes and direction we need to put our feet on higher ground. You can find her writing at elephant journal, the Kindness Blog, and on her writer’s Facebook page.

Overthinking & the Zen of Pancakes: How to Abide in Simple Thinking

When a Shift in Your Life Comes As a Final Ending.

Today I Will Keep My Eyes Open. {Poetry}