The Heart of The Heart Sutra.

This is the word that is true,

No longer distorted by illusion,

The word that comes from the heart, that says:

Gone, gone, gone beyond, and with everything

Gone even beyond going beyond.

*From the Heart Sutra of Wisdom beyond all Wisdom, the Prajnaparamita.

A meditation master once said in a lecture that people who practice meditation develop a comfortable feeling, a sense of joy radiating from their inner being.

The little owl often found roosting on a local barn gable always looks very comfortable and happy too, despite the blustery winds. I have long given up trying to be perfect but as a human being, I continue to seek the inner harmony symbolised in this diminutive bird, a life that is peaceful and ‘no longer distorted by illusion.’

Is this perhaps what the Heart Sutra refers to? What is this sutra about exactly? Where is that clattering train of gone, gone, gone’s going to..?

Meditation, understood as the direct contemplation of your own heart and the recognition that you are already Buddha, is said to have come to the West from India via China and Japan. Tradition has it that Bodhidharma brought it over to China where the Chinese emperor Wu-ti asked Bodhidharma what the main principle of Buddhism was.

He replied, “Vast emptiness. Nothing sacred.”

Feeling unsatisfied and somewhat disgruntled at this reply, the emperor then asked, “Then who is here in front of me?” Bodhidharma said, “No idea!” (“I don’t know”). The emperor did not understand and Bodhidharma crossed the river to Wei. Commenting on this incident, another teacher later wrote that if we can penetrate into these three little words “I don’t know,” the task of our whole lives would be completed.

This does not mean that we should adopt an attitude of childish naivety.

Such an attitude would be to favour emptiness over the world of form, and try and hide in it. It may seem like liberation but amounts to just another dead-end, an attempt to make a safe nest out of spirituality in the midst of an unspiritual world. In other words, we would get stuck in a duality that sees only one side of reality. Prayer and silence can act as a necessary counterweight in a hectic life, they can be a precious resource on the road to self-knowledge, but they can also be a disguised flight from responsibility.

The self-image we consciously or unconsciously use for protection in our development into maturity begins to feel a little tight over time.

Yet a familiar self-image is better than falling into the emptiness of an imageless void. But is this not precisely what the sutra invites us to do? We are invited to travel beyond the duality of our images—images that will only ever grasp one side of reality, the side of form—and to fall into the formless, if only for half an hour at a time on the meditation cushion.

An owl cannot always stay airborne and must eventually land somewhere. Coming down to earth means opening up to everything inside you. That can bring a lot of new information and the experience of something more, infinitely more.

Connecting with our true Self ultimately means to go beyond self-knowledge and enter the domain of don’t know.

We won’t see anything with the eyes, but the mind can experience this freedom. Returning to the world of form, we will look at it differently and in its proper context.

It is said that enlightenment requires that you forget yourself. Life often demands this anyway. To forget yourself is to have the open and non-judgmental heart of a child. This is regarded as the most advanced stage in spiritual development in all religions. A heart which is no longer distorted by the illusion that the self and the other are not one.

Once freed from subconscious gossip, we begin to truly see.

The old thoughts are still there, in fact they seem to stand patiently in line waiting for our attention, but now they are seen for what they are and from a larger space outside their linearity. The void that we were scared of falling into now appears less threatening, even full of new perspectives and, because we now feel inwardly more comfortable, we become kinder to ourselves. Compassion naturally ensues, it’s not something that is ‘done.’

Where then exactly does the express train of rattling of gone, gone, gone’s in the Heart Sutra go? That is not written down. Beyond everything, at least we know that much. Even beyond going beyond. What could that mean? Is it so that we have to go so far into openness that even the concept of ​​‘openness’ itself disappears? As if the express train passes so quickly through every station that—without any more reference points—we seem to travel in a stillness and silence beyond time and space?

The text instructs us to go beyond everything but what will remain and where will we end up? No answers are given. And rightly so. Is it not true that some things just cannot be said?

What is reflected in the deepest chambers of the heart is often barely describable in words. If two friends reveal their hearts to each other, they become intimate.

Heart speaks to heart. Yet they encounter limits in themselves and each other that must be respected by the other, even actively guarded.

The sutra is speaking to us very intimately in this last verse:

The Heart Sutra wants to show us its heart, the heart of reality, unfathomably simple and innocent as that may be. When we have truly gone beyond, all words included, we break through again into what is here and now, with all its imperfection. But now looked upon with a liberated mind. Once we have touched the heart of the Heart Sutra​​ we know that all that the little owl is perfect, each thing is perfect.

This unconditional joy of a life gone beyond resounds in the final jubilant cry of the sutra: “Awakened!” 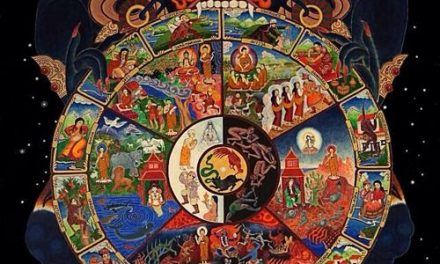 The Question of Rebirth in Secular Buddhism

Koans: What is The Sound Of A Riddle Contest?

Finding Compassion in a Time of Ire