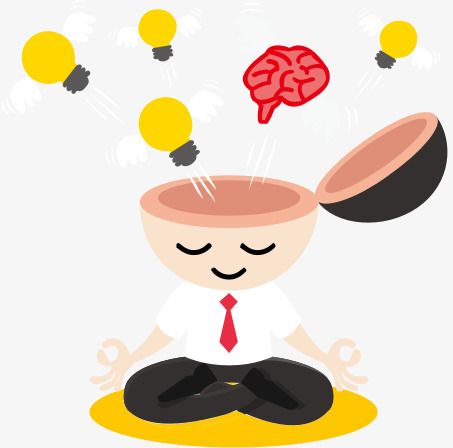 I’m a fan of making mindfulness available to everyone, but only if the intention is right, if the motive is to help people live happier, more peaceful lives.

I just got employee of the month. They gave me a little plaque and everything.

My manager called me into the office. I wondered, “Alright, what am I in trouble for? It could be so many different things.” Instead, he slid the incentive toward me across the desk. “Thanks.” I unceremoniously tossed it in my locker next to a few Wurthers and a stale pack of cigarettes I forgot to throw away. I’ve never cared much about such things. They can keep their sticks and carrots.

I don’t love my job. In fact, I’m quitting sometime in November to hole up for the winter in a kind of at-home retreat. I’m supposed to be a janitor, but I’ve been zoning shelves for the last three months. All night long I just go through the store making everything look pretty. People ask me how I haven’t lost my mind yet. “I did lose it, that’s how I wound up here in the first place.”

Zen is what makes the work tolerable.

I clock in and just meditate all night long. I have no preferences, no urge to be anywhere else doing something else. Just the method. Sometimes I feel like I could keep working for another eight hours.

That’s why a lot of companies are offering mindfulness training to their workers. It has astonishing effects on employees’ productivity, accuracy, attendance, and morale. If the nameless retail giant I work for offered mindfulness classes, well, it’d be a fuckin’ force of nature.

This allows managers to take advantage of their employees, to treat them like machines. In WWII, the Japanese government gave the pilots Zen training so that they could fly their planes into ships without hesitation—using mindfulness to have a worker stock faster or put in some overtime seems totally doable by comparison.

And that’s kind of a dick move, really—for several reasons. For one thing, it’d be like if researchers discovered that prayer increases productivity, so bosses started having their workers say the Lord’s Prayer at the beginning of every shift. I know mindfulness has a life outside of Buddhism now,  but still, it feels like it cheapens things somehow; like someone taking a dump on  your way of life. Taking something that’s foundational to you and making it a consumable designed to raise profits.

Second, it just feels unethical in some way since these mindful employees aren’t seeing any wage increases for their hard work and they aren’t demanding it because, well, the work doesn’t seem so hard anymore.

I’m a fan of making mindfulness available to everyone, but only if the intention is right, if the motive is to help people live happier, more peaceful lives.

Where I work, no one knows that I practice Zen—they just see the effects of it, yet even then it seems like I’m being used. I can’t imagine how rough it’d be at a business where they know that you’re practicing mindfulness. Of course if the mangers and executives took the classes as well, then maybe things would even out.

If anything, it’s the people in charge who need it the most.

For the angry, violent man I was, it only fits I would find my way through crisis circumstances.

By Deb Avery Is there a secret to living a happy life? I think so. And I think that secret is in keeping things simple. Animals and children naturally know how to do this. I think we are all born knowing how to be happy. But then we are introduced to our...
Read More

Stressed at Work? How Mindfulness Helps:

By Leo Babauta There isn’t a working person among us who doesn’t deal with stress. Whether you’re an entrepreneur, a freelancer, working for a struggling startup, or clocking in working for a company, work stress is inevitable. But where does this...
Read More

By Leo Babauta Almost our entire lives are spent in a quest to gain control, security and comfort in our lives. Unfortunately, we never really get it, so we keep trying, relentlessly. This is the main activity of our lives. What would happen if we stopped? We...
Read More

Parched and Wondering in California.

Enlightenment: Do You Want Fries with That?

Your Practice, Your Choice

We are All Wounded and We Can All Rise Above It